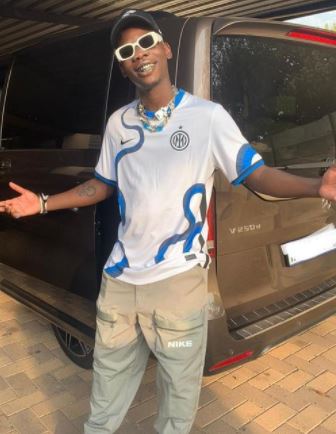 Blxckie and his girlfriend has been called out and accused of cheating.

This is coming after a recent viral video has forced his woman to surface.

In the video, Professional dancer Tione Martinez called out Blxckie for giving her a cold shoulder.

Tione also dragged Blxckie’s girlfriend Hermosa in a video that is making rounds on social media.

She said she has known Blxckie for a while and they have also made songs together but now he is acting fresh on her since he became famous, “I was popping way before you…somnyama. I am actually pissed off because he embarrassed me…” she said.

She said he does not act like he knows her on social media but he wants to pull up on her in the club. Continuing her rant, Tione also dragged Blxckie’s girlfriend right along.

She said: “Hermosa do you know what Blxckie is doing in the club, you are busy posting videos of you guys…” she said laughing also adding that men are not loyal.

Tione Martinez calls out Blxckie for acting fresh on her since he became famous. pic.twitter.com/tE0JmJfddi

She also made it clear that she is Blxckie’s girlfriend, not a video vixen.

Watch the video below:

The post Blxckie and his girlfriend get called out – Video appeared first on .